Why is There So Much Drama in Olympic Boxing? 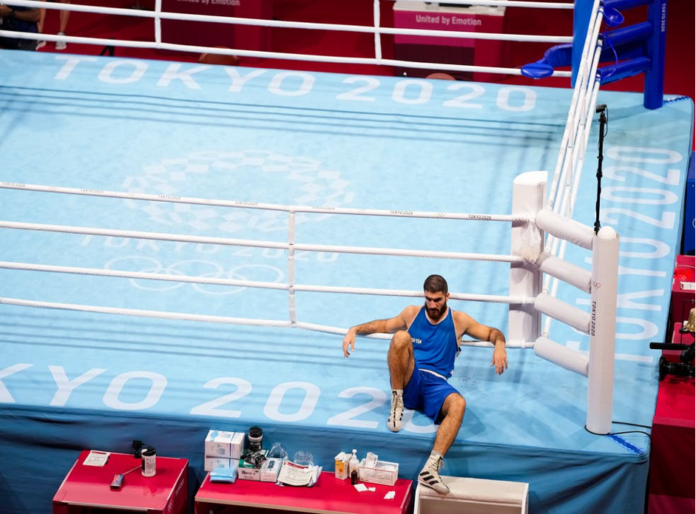 The sport now is essentially defined by images of outraged boxers protesting their perceived injustices.

When Mourad Aliev sat on the boxing ring apron at the Kokugikan Arena for an hour after his disqualification for head-butting, the French super heavyweight took a metaphorical seat alongside all the boxers who believe they’ve been grievously wronged by Olympic refereeing and judging.

Over a century into boxing’s stormy Olympic history, that gathering of angry fighters could fill an arena.

For as long as boxing has been in the modern Games, fighters and fans have complained about it. Every attempt to improve the judging and officiating has been undone by another round of missteps.

The sport now is essentially defined by images of outraged boxers protesting their perceived injustices, from Byun’s Seoul ring sit-in to Conlan’s middle fingers to the Rio judges. Losing fighters cry conspiracy and corruption at almost every defeat, never explaining why a global cabal was created specifically to hurt them.

But how much of modern Olympic boxing’s dismal reputation is rooted in genuine scandal, and how much is simple human inconsistency? What causes some of those controversial decisions?

The Fights are Short

Modern Olympic fights are three rounds. That’s rarely enough time to decide anything in a quality boxing match. Many professionals are just starting to work in the third round, but an Olympian can be doomed before that.

The fights are short by necessity, since boxers must compete multiple times in the 16-day tournament. The differences between fighters are often minuscule over nine minutes of competition compared to 36 in a pro title fight, but a losing boxer always fixates on what she did well.

Unless boxers are allowed to fight until one physically incapacitates the other — which is the way they actually competed at the ancient Olympic Games in 688 B.C. — decisions are an unfortunate necessity.

Every boxing decision is inherently subjective, despite what your friend who buys every pay-per-view wants you to believe.

A good example arose when Conlan lost a decision to Russia’s Vladimir Nikitin The touted Irish bantamweight provided the iconic image of those Games when he flipped off the judges, slowly rotating so everybody could see his opinion.

But that’s the dilemma: Judging is an opinion.

Conlan and his supporters claimed the decision represented anything from endemic financial corruption to a conspiracy supporting a Russian team that won one gold medal. To many others, Conlan boxed well and probably deserved the decision — yet he also got punched in the face repeatedly by Nikitin, who exploited Conlan’s inconsistent defense. Nikitin fought courageously with a bloody face, and he landed enough to have a chance in a short fight.

Conlan believes he was robbed. Others believe he just wasn’t dominant enough to remove objective doubt.

And these are all opinions.

All Over the Place

Many bouts in Tokyo have featured five judges from five continents. It’s an admirable dedication to representation, but judges from vastly differing backgrounds are rarely in lockstep on the intricacies of scoring.

The International Boxing Association (AIBA) made a much-praised return to the 10-must scoring system before Rio, and it dedicated extensive resources to coordinated judge education. Progress was being made.

AIBA was then suspended from the Olympics in 2019 after widespread financial problems alongside the usual complaints about the judging at the 2016 Olympics — where there were actually fewer inexplicable results than in Beijing or London under the old punch-counting system. Olympic judging has moved forward and backward for decades, and this dance marathon is tiring.

Referee Andy Mustacchio disqualified Aliev for head clashes with British opponent Frazer Clarke, who had cuts near both eyes. Aliev claimed he hadn’t even been warned, although others at ringside disagreed. “Those are the rules of the sport,” Clarke said. “We didn’t make them.”

Olympic boxing has rules encouraging early stoppages for violations, ostensibly to protect fighters. Professional referees usually prefer to extend a bout, since that’s why everyone is being paid to be there — and that’s often when it’s getting good.

The Olympic sport often doesn’t understand this flexibility: French lightweight Sofiane Oumiha was stopped Saturday when Keyshawn Davis stunned and wobbled him with punches that didn’t even knock him down.

Aliev and Oumiha almost certainly would have been allowed to continue a pro fight. A zealous referee can end an Olympic fight for relatively minor reasons — even when it seems terribly unfair.

Simply put, many boxers are poor sports. That’s a self-preservation instinct: Most fighters’ careers are over when they begin to lose regularly. It’s rare for any boxer to accept defeat when a close fight goes to a decision — and that’s about 90% of Olympic bouts.

Most boxers are inextinguishably confident in themselves. They take a losing decision as a personal attack to be countered with two middle fingers up, or with a ring sit-in.

This article was originally published by AP newswire on August 3, 2021.